Finally, Apple released its next iPad few hours ago. Before Apple’s event today, there were number of speculations that this ‘Resolutionary’ (that’s what Apple is calling it on its official website)  device is called as ‘iPad 3’ or ‘iPad HD’. But, Apple just named this new product as just ‘The new iPad’. Perfect! 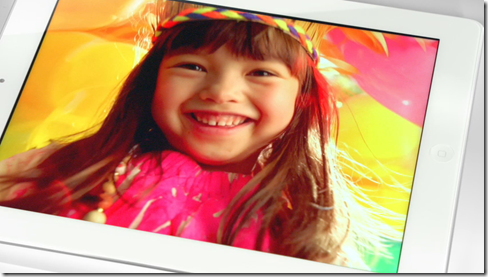 This naming convention makes sense if you think for long term. Just think about in future, does iPhone 13 or iPad 16 makes sense to you? This also makes sense if you think about the iPhone series. The current iPhone 4S is actually the fifth generation iPhone device, and the next iPhone series is the sixth generation and Apple may call it as iPhone 5. Err, may be or completely not. Hope Apple call the next iPhone just ‘iPhone’, instead of iPhone 5. This is just similar to MacBooks, iMacs or Apple TVs.

iOS 5.1 is now available for download – The major updates in this release include –

Images can now be deleted from PhotoStream

Retina Display with a spectacular 2048 x 1536 resolution at 264 pixels per inch. That’s 3.1 million pixels and more resolution than a HDTV.

Dictation (its not your Siri!)

If you are feeling more lucky to watch the event, navigate to the event link from the official website here.